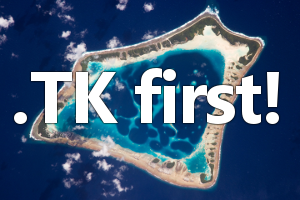 The .TK country code top level domain (ccTLD), one amongst the three TLDs with the most detrimental domain registrations and whose domains are given away free of charge for the most part, has surged to first position among ccTLDs with 16.7 million valid registrations, the most recent CENTR DomainWire report reveals.

According to the CIA Factbook, Tokelau (a small Pacific Island with a population of 1353) together with .COM and .INFO, is to blame for 82% of malicious domain registrations. This figure comes from a phishing survey published in April by the Anti-Phishing Working Group (APWG).

Obviously, they’re all overshadowed by .COM domain with 108.8 million registrations, as reported by Registrar Stats.

Additional highlights of the DomainWire report:

How to register .TK?

To register .TK (Tokelau) domain name simply use the form located below or contact our support team at support@web-solutions.eu.

Enter the .tk domain name you wish to register, or select an extension group and click search button