The total number of country code Top Level Domains (ccTLDs) increased by approximately 4 million within 12 months as of April 2013. 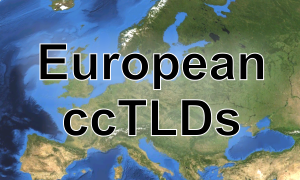 Country code top level domains represent about 35% of all domain name registrations globally according to the Domain Name Stat Report published by DomainWire in May 2013. The study of data gathered over the 3-year period from 2011 to 2013 indicates that the number of European ccTLDs tends to decrease except for the ccTLDs within the 5-10% growth range. The overall renewal rate remains at approximately 79% showing a slight increase in some zones.

Ranking of ccTLDs
Among the world’s top 20 ccTLDs there are nine European country code TLDs: .NL ranks number five (the Netherlands – 5,2 million), .FR is in the eleventh place (France – 2,6 million domains) followed closely by .IT (Italy – 2,5 million domains) and .PL (Poland – 2,4 million). Switzerland’s .CH (1,8 million), Spain’s .ES (1,6 million) and Belgium’s .BE (1,4 million) hold the sixteenth, eighteenth and twentieth positions respectively. The European Union ccTLD .EU, although it does not refer to any specific European country but has an established history, ranks number 7 on the list with 3,7 million registered domains.

Implementation of IDNs (Internationalised Domain Names)
The popularity of using native-language characters in domain names has grown to various degrees in different European countries. Among 42 ccTLDs, 28 zones already offer IDNs (that is 67%) with the addition of .EU (TLD for the European Union) and .VA (TLD for the Vatican City). Three further zones (Belgium, Cyprus and Slovakia) are planning to implement IDNs in the near future. The top ranking IDN TLD is Russian .PФ with almost 800,000 registrations followed by Germany’s .DE with more than 600,000 IDNs.

Overall, the global ccTLD market share increased by 2% within 12 months from April 2012. The most common usage of ccTLDs in Europe is for commercial purposes (61%). Germany’s .DE domain accounts for 15,5 million registrations making it the largest ccTLD zone in Europe.