The .IN Registry has recently posted new data on the growth of the Indian country code domain. 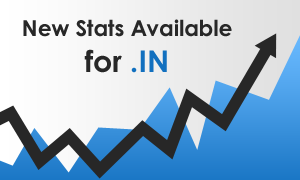 So far, the .IN extension has gone under-reported despite considerable interest. Information has not been published in registration rankings nor has it appeared in industry reports. Finally, the .IN Registry has made the results available to a wider audience.

Currently, there are 2,067,508 registrations within .IN, according to the Registry. The Indian extension was launched in 2004 and covers economically and linguistically diverse sectors of Indian population of about 1.25 billion. IDNs (Internationalised Domain Names) are also available in seven Indian languages.

Despite the uneven distribution of Internet access across India, the ongoing economic development along with the increasing number of registered domain names hold the promise for the growth of the .IN domain’s both primary and secondary market. Though not very popular on the global market at the moment, in time, the .IN extension may gain a momentum and become a valuable player.

Pricing and requirements for .IN domains, India:

Enter the .in domain name you wish to register, or select an extension group and click search button