With about 50,000 registrations at the beginning of the day on 16 June, the .BERLIN domain gained over 65,000 new registered domain names, ending the day with the total of more than 116,000 registrations. 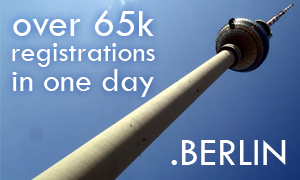 Compared to the questionable activities of .XYZ domain registry that offered their registrants of .COM domain names the equivalent .XYZ domain unless they expressly opted out of the offer, the .BERLIN promotional campaign is a stark contrast.

Gaining visibility may prove more and more difficult with so many as 302 new gTLDs approved for the release to the net. Some have not entered their Sunrise periods yet, let alone begun General Availability and there are hundreds more to become available.

The .BERLIN promotional campaign has certainly given their registrations a lift!

If you too want to register your .BERLIN domain name, click on the domain now. For more information, contact our Support Team at support@web-solutions.eu.

gov.mtmtnet.mtpornprrealtorrenrosciencestudiosutoptvtx.usva.uswebsitewi.uswsxyz网址
New gTLD news
Over 65,000 .BERLIN Registrations In One Day