The first quarter of 2014 was marked by an addition of five million domain name registrations globally, mirroring the results of the fourth quarter of 2013, according to the latest Domain Name Industry Brief by Verisign. 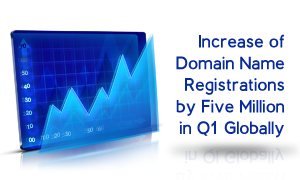 Among country code top-level domains (ccTLDs), there were added 27.1 million domain names, a 2.9% increase quarter over quarter, and a 13.1% increase year over year. Amongst the top TLDs in general, the .RU domain (Russia) moved up to the eighth position, swapping places with .INFO (the seventh).

As of 31 March, there were 283 global ccTLD suffixes approved by ICANN, including IDNs (Internationalised Domain Names), with the top ten ccTLDs comprising 65.8% of all registrations within ccTLDs.

Here is some additional information from the report that may be of interest:
69% of all .COM websites are in English
more than 95% of networks are compromised in some way
Internet users send 204 million emails per minute.
If you wish to register a domain name that will suit your needs, be it .COM, .NET, a new gTLD or a ccTLD, please click the domain extension to check the name availability.
If you have any questions or need assistance, please don’t hesitate to contact us by email at support@web-solutions.eu or via phone on +44 (0) 20 4571 1971.