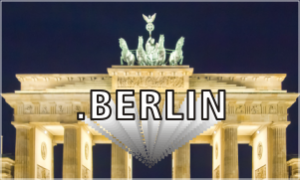 The .BERLIN domain has got off to a flying start on the domain market. Within 24 hours after its release for open registration on 18 March 2014, there have been 30 thousand registrations under the extension. The .BERLIN domain’s market share is currently 11,7 percent – only 1.5 percent less than .GURU which boasts nearly 46,000 registrations.

Currently, the dynamics of the two domains has significantly decreased, however .BERLIN continues to grow faster than the current market leader. In recent days, the number of registrations under .GURU has revolved around 200 domain names per day while the daily number of registrations under .BERLIN has been around 1,000. If this trend continues, the .BERLIN domain will soon become a leader among new gTLDs.

The German geographic domain has been considered as a “sure thing” from the very start and its huge success has been expected. With more than 15 million names registered under the country code domain .DE, optimism seems justified. What is more, the .BERLIN Top Level Domain project was preceded by nearly a decade of preparations that included promoting the extension among the Berlin authorities, businesses and residents. The success of .BERLIN is the result of long-term efforts aimed at raising awareness among the target groups and careful PR and marketing activities. Another key element is the fact that Berlin is a city with the population of 3.5 million and a booming new technologies market.

.BERLIN is the first geoTLD that has entered the General Availability phase and one five geoTLDs that have been approved for release to the Internet in the German-speaking area. Other extensions include .RUHR (for the Ruhr Region), .WIEN (for the Austrian capital Vienna), .KOELN and .COLOGNE (for the city of Cologne). The German-speaking regions’ representation on the Internet does not stop there. More representative geographic TLDs are coming soon: . BAYERN, .HAMBURG, .SAARLAND and .NRW (North Rhine -Westphalia).

Other world cities focus on online promotion as well, for example Japanese cities of .NAGOYA, .TOKYO and .OKINAWA which have recently been approved by ICANN. Among other famous cities that will have their own domains there are Rome (.ROMA), London (.LONDON), Paris (.PARIS) and New York (.NYC). The three-letter .NYC may be especially attractive for investors not only because of the huge economic potential of the largest U.S. city but also due to the attractiveness of the domain itself – .NYC is an easily recognizable acronym that practically is a “brand” of New York.

The growing interest in geoTLDs, especially those corresponding to the names of cities, as well as the increasing popularity of IDN domains show that the locality is valuable. This is largely due to the growing number of websites devoted to local affairs of cities as well as the wide use of mobile devices that effectively utilise geolocation apps to promote local businesses. City name domains will be a contributing factor in enhancing local identity and building business relationships.

To check if the domain name that best manifests your local pride or affiliation is available, enter the domain name in the box or fill in the form provided. If you have any questions about new geographic domains or any other domains, please contact our Support Team at support@web-solutions.eu or via phone on +44 (0) 208 133 3994.