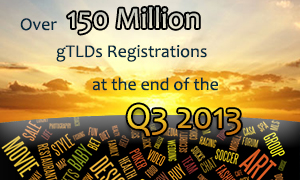 At the end of September 2013, according to the latest registry reports, there were more than 150 million domain names registered in generic Top Level Domains (gTLDs).

As expected, .COM tops the list with over 113 million domain names followed by .NET, a distant second, with 15.5 million registrations.

Enter the .com domain name you wish to register, or select an extension group and click search button

gov.mtmtnet.mtpornprrealtorrenrosciencestudiosutoptvtx.usva.uswebsitewi.uswsxyz网址
Global domain news
Over 150 Million Registrations under gTLDs at the end of the Third Quarter 2013