According to the most recent DomainWire report, the number of European country code TLDs tend to increase at the average rate of 0.47% per month. 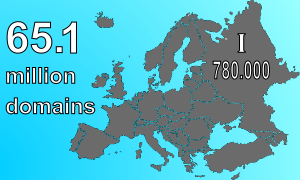 Despite its reputation as one of the top level domains with the most phishing domains, the number of .TK (Tokelau) domain registrations continues to soar. According to the most recent DomainWire report, the number of .TK registrations grew by 13.9% in the quarter ending August, with total domains under management reaching 19.1 million. Domain names under .TK are given away for free.
The report further notes that .DE (Germany), still in the second place among ccTLDs, continues to grow with 15.5 million domain registrations while .UK (United Kingdom) ranks third with 10.6 million domains under management. Meanwhile, .CN (China) makes a rapid rebound with 7.8 million registered domains.

Within Europe, there were just over 65.1 million domains under management at the end of August 2013. That is an increase of around 3.6 million over the period of 12 months with the overall net growth of 5.9%. The ccTLD with the largest contribution to the increase is .RU (Russian Federation) with 780,000 domain registrations.

According to the report, the annual growth rate of European ccTLDs has decreased (5.9% within the 12-month period ending August 2013) compared to the 12-month period ending April 2012 with the growth rate of 6.6%. Still, on average it is 2.5% higher than the growth rate of gTLDs globally. The data show that the number of European ccTLDs tend to increase at the average rate of 0.47% per month. While the number of ccTLD registrations on a global scale grew by one percentage point in the 12 months ending August 2013, the share of gTLDs decreased by the corresponding percentage point.

Furthermore, more and more ccTLD registries engage in formal marketing using traditional and innovative tools. The conventional ‘offline’ channels including printed media, TV and radio are popular among some registries while others engage in sponsorship arrangements and co-marketing programmes and initiatives.
To check if the national domain of your choice is available, please enter the desired name in the box below or contact Web Solutions’ Support Team at support@web-solutions.eu.